GERARD CHERVAZ With a link to a movie. 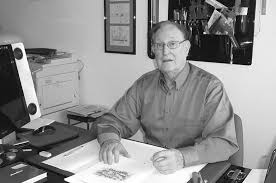 The Board of Directors of the association flainoise regrets to announce the death of our honorary president, Gérard Chervaz, in his 92nd year. Gérard Chervaz was the driving force behind the creation of Flaine, without him our resort would surely not have seen the daylight. As a passionate mountain man, he spent his young years crisscrossing the Alps with sealskins skies and his excursions led him to spend the night several times in the refuge of the Fédération Montagnarde Genevoise, which was in the middle of the current Forum. During a traineeship in Paris in 1953, Gérard felt a bit homesick far away from Genev and the summits he loved so much. He then began to study the topographical maps of the Alps and to dream about creating a ski resort. He rediscovered the site of Flaine and thought that is was perfect for that purpose. Therefore, he spent a lot of energy to find financial partners capable to invest in such a large project. He obtained from the authorities of Arâches an exclusivity on the lands of the Flaine valley. After several aborted attempts, his relations brought him in contact with the Boissonnas family. In 1959, he took Eric Boissonnas to the site and the charm of this magnificent snowy valley operated, the adventure of the construction of Flaine could then start. Despite the turpitudes of such a project, Gérard Chervaz has always remained on Flaine’s steering committee, which he considered to be “his baby”. The general architecture having been entrusted to Marcel Breuer, Gérard would nevertheless be the author of works important for the station and particularly well executed: the cable car (DMC) stations of the Grandes Platières, the Aup de Véran gondola, and the «Grands Vans» building. In addition to his works in Flaine, Gérard Chervaz has built chalets in Les Carroz and many buildings in Geneva. Gérard Chervaz was a pillar of the Association Flainoise, working there from the beginning. He served for many years on the Board of Directors and contributed with his valuable knowledge and relationships. During the years of the signatory’s chairmanship, when most of the former members of the committee had withdrawn, Gérard stayed and contributed to our association continuing its mission. In the last years, his health couldn’t allow him to travel to Flaine, but from the terrace of his apartment in Geneva, he could contemplate the Grandes Platières and the cable car station that he has designed, so he could remember with proud that his young man dream had become a reality.

We have lost a visionary, a builder and, for many members, a friend. We hope that Gérard has found new immaculate peaks to hike on and that, from where he is, he can see the magnificent Flaine valley that, like him, we love so much.

In the name of the Board of Directors of the Association Flainoise. Thomas Heppel, Vice President

Note : Our Association had the privilege to publish the memoirs of Gérard Chervaz on the construction of Flaine, written in 1995. Here (in French): http://associationflainoise.fr/Site...

Here is a link to a movie with Gerard Chervaz introducing the reasons of the choices for Flaine resort construction.: https://www.youtube.com/watch?v=KzO... Thank you to Thibaut to have transmitted the link.

Articles by this author